CinéSPEAK + Philly Vets for Peace present We Are Not Done Yet, pres. with Bright Bulb 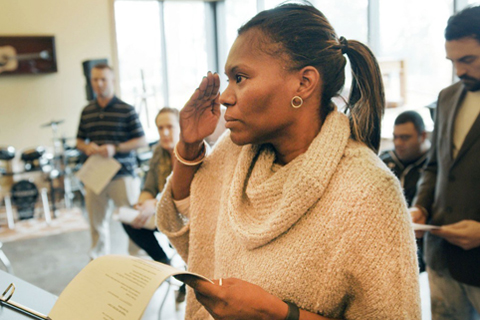 CinéSPEAK + Philly Vets for Peace present We Are Not Done Yet
Every 2nd Thursday of the month, you can catch a wide array of films at The Rotunda, curated by filmmakers and presenters from all around the city as part of The Bright Bulb Screening Series.

This November, courtesy of HBO, CinéSPEAK and Philadelphia Veterans For Peace, present WE ARE NOT DONE YET (2018) -- a riveting exploration of trauma and resiliency from within our United States veteran community.

--
ABOUT THE FILM:
We Are Not Done Yet (2018)
Directed by: Sareen Hairabedian
Produced by: Jeffrey Wright
Running Time: 1 hr 20 min

Since 2001, 2.77 million U.S. service members have been deployed to support American war efforts. Approximately 14 to 20 percent of veterans who engaged in conflicts in Iraq and Afghanistan experience PTSD, while 32.4 percent of female veterans report having experienced military sexual trauma.

Directed by Sareen Hairabedian and produced by Jeffrey Wright (Emmy winner for HBO’s Angels in America, two-time Emmy nominee for HBO’s Westworld) and David Holbrooke (HBO’s The Diplomat), We Are Not Done Yet profiles a group of veterans and active-duty service members as they come together to combat past and current traumas through the written word, sharing their experiences in a United Service Organizations writing workshop.

---
ABOUT PHILADELPHIA VETERANS FOR PEACE:
Veterans for Peace (VFP) is a national organization founded in 1985 comprised of members across the country.
As Veterans for Peace we draw on our personal experiences and perspectives gained as veterans to raise public awareness of the true costs and consequences of militarism and war - and to seek peaceful, effective alternatives. Our collective experience tells us wars are easy to start and hard to stop and that those hurt are often the innocent.
Philadelphia VFP members are working to stop the wars in Iraq and Afghanistan, show youth alternatives to militarism and violence, stopping the global plague of landmines and clusterbombs, and ending the horror of gun violence.

--
ABOUT CINÉSPEAK:
We are a Philadelphia-based organization that engages diverse audiences through our independent, repertory + foreign film programming; creating space + centering the stories of individuals and communities that are often underrepresented in mainstream cinema.

We promote community togetherness + global understanding by engaging film enthusiasts while cultivating the next generation of discerning moviegoers; encouraging people to demand social justice both on-screen + throughout society.