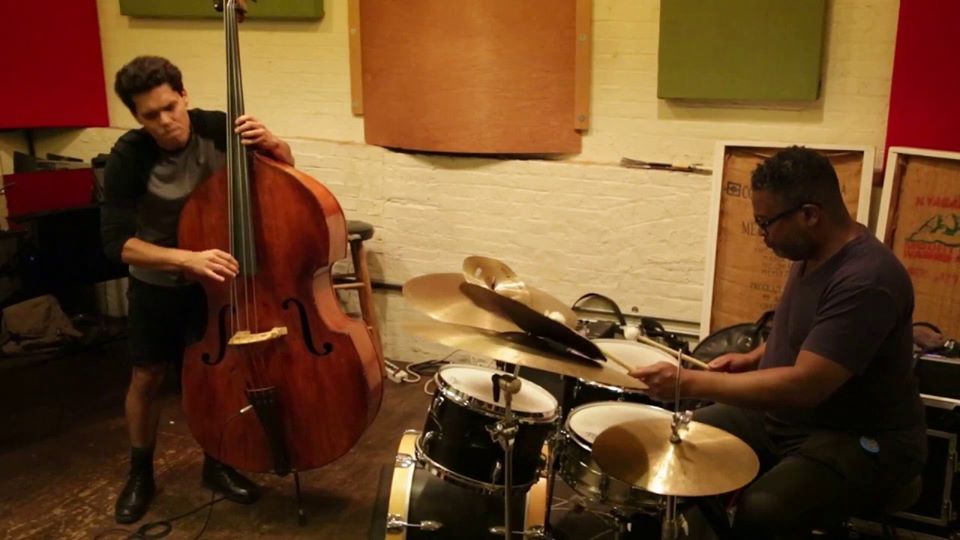 THE CURATORS OF THIS EVENT REQUIRE THAT EVERYONE IN ATTENDANCE SHOW PROOF OF VACCINATION AT THE DOOR. MASKING AND CONTACT TRACING ENFORCED. SEATING IS LIMITED FOR PURPOSES OF SOCIAL DISTANCING, ADVANCED REGISTRATION IS RECOMMENDED (please go to www.eventbrite.com/e/brandon-lopezgerald-cleaver-duo-toned-tickets-344861769837).
Brandon Lopez/Gerald Cleaver Duo:
Brandon Lopez works at the fringes of jazz, free improvisation, noise and new music. This collaborative powerhouse never lets up with Gerald Cleaver who is among the most agile and wide-ranging first-call musicians on the 21st century jazz scene.
New York-based composer and bassist working at the fringes of jazz, free improvisation, noise and new music. His music has been praised as “brutal” (Chicago Reader) and “relentless” (The New York Times).
From the New York Philharmonic’s David Geffen Hall to the DIY basements of Brooklyn, Lopez has worked beside many luminaries of jazz, classical, poetry, and experimental music, including Fred Moten, John Zorn, Okkyung Lee, Ingrid Laubrock, Tony Malaby, Tyshawn Sorey, Bill Nace, Chris Potter, Edwin Torres, Tom Rainey, Cecilia Lopez, Sun Ra Arkestra, Susan Alcorn, Mette Rasmussen, and many others.

Brandon was a 2019–2020 Artist in Residence at Roulette, a 2018 Artist-in-Residence at Issue Project Room and 2018 Van Lier Fellow at Roulette Intermedium, Recent highlight performances include opening the 2018–2019 season of the New York Philharmonic as a featured soloist in Ashley Fure’s “Filament” and a number of works with John Zorn, including the Zorn’s 35th anniversary of “Cobra”.

Drummer Gerald Cleaver was born and raised in Detroit, Michigan, and is a product of the rich music tradition found there and also in his home. Inspired by his father, John Cleaver, also a drummer, he began playing the drums at an early age. He also played violin in elementary school and switched to trumpet during junior high and high school. While in his teens, he gained early working experience with Ali Muhammad Jackson, Lamont Hamilton, Earl Van Riper, and Pancho Hagood and later with Marcus Belgrave, Donald Walden, Rodney Whitaker, A. Spencer Barefield and Wendell Harrison. Cleaver earned a B.A. in music education from the University of Michigan. During his studies he was awarded an National Endowment for the Arts Jazz Study Fellowship to study with drummer Victor Lewis. After graduating he began teaching in Detroit, and later joined the jazz faculty at the University of Michigan and Michigan State University. He relocated to New York in 2002.

TONED pits the fiercely analog, animalistic saxophone of Tom Weeks against the crushing digital precision of Nathan Corder’s eminently mutable networks, alongside the poly directional structures of Leo Suarez’s approach to percussion, all while maintaining a driving, rock-hard musical synthesis – following in the tradition of Roscoe Mitchell’s encounters with George Lewis’ Voyager, Bay Area legends The Hub and Possessed, and the brutally technical compositions of Disgorge. The trio’s decentralized locale, between Oakland and Philadelphia, is reflected in the nonlinear and non-hierarchical processes that construct the band’s recent self-titled release.

venue is wheelchair accessible, please contact us at media at museumfire dot com for more info

THE CURATORS OF THIS EVENT REQUIRE THAT EVERYONE IN ATTENDANCE SHOW PROOF OF VACCINATION AT THE DOOR. MASKING AND CONTACT TRACING ENFORCED. SEATING IS LIMITED FOR PURPOSES OF SOCIAL DISTANCING, ADVANCED REGISTRATION IS RECOMMENDED (please go to www.eventbrite.com/e/brandon-lopezgerald-cleaver-duo-toned-tickets-344861769837).